Arianja is a multi-continent, multi-national world, so large that most of the cartographers on the central continents believe the world to be round.  Those who live on the edges, however, know better.  The central continent has been largely shaped by the conflict between the native Vyjsig, a warrior clan, and the invading sorcerers - from Gatanea and other worlds - who were collectively known as the "Khlaovi."

The denizens of the Turtle's Eye and the Rimward Continents developed without as great outside influence, thanks to the Sea of Salero, the Sable Sea, and the Zerineq - although no amount of water was going to stop the infighting, usurpations, alliances, and casual dominating between their own nations.  Of all the Rimward nations, the people of the Jing-jang who received the good news from the Father's messengers, carefully cultivated a reputation for being particularly backward and barbarian, in order to protect the religion they'd received.

What follows are a few rough maps, such as they stand at present, of continents, countries, and cities.

A rude map of the main continents, as of the fall of the Third Khlaovi Empire, and a God's eye view of the continents of Arianja.  The Central Continent (also known as Arianja), to the south-east, the Tortoise's Eye, and further down the Jing-jang. 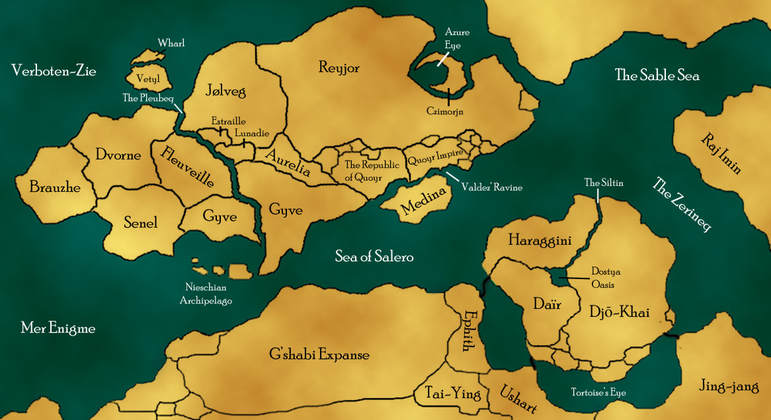 Explore the World of Arianja